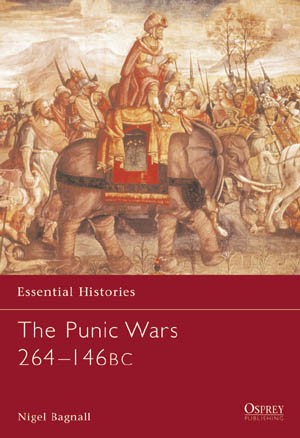 About this book:
The three Punic Wars lasted over 100 years, between 264 BC and 146 BC. They represented a struggle for supremacy in the Mediterranean between the bludgeoning land power of Rome, bent on imperial conquest, and the great maritime power of Carthage with its colonies and trading posts spread around the Mediterranean. This book reveals how the dramas and tragedies of the Punic Wars exemplify many political and military lessons which are as relevant today as when Hannibal and Scipio Africanus fought to determine the course of history in the Mediterranean.

Nigel Bagnall was born in India in 1927, the son and grandson of Army Officers. He was educated at Wellington College and joined the army in January 1946. Commissioned a year later he saw service in Palestine, Malaya, the Canal Zone, Cyprus, Borneo, Singapore and Germany. He was Commander in Chief of the British Army of the Rhine and ended his career as Chief of the General Staf. He was a Defence Fellow at Balliol College, Oxford, and is now an Honorary Fello. His previous book on the Punic Wars has been published in both English and German.

Contents:
# Introduction
# Chronology
# Background to war : Two great Mediterranean powers
# Warring sides: Carthaginian and Roman forces on land and sea
# Outbreak: Collapse of the Third Treaty of Friendship
# The fighting: The three Punic Wars
# Portrait of a soldier: Hannibal Barcid and Scipio Africanus
# The world around war: The political, social and economic impact
# Portrait of a civilian: Carthaginian trade; a Roman senator
# Conclusion and consequences: Expansionism and the disposition for war
# Glossary of names
# Further reading
# Index