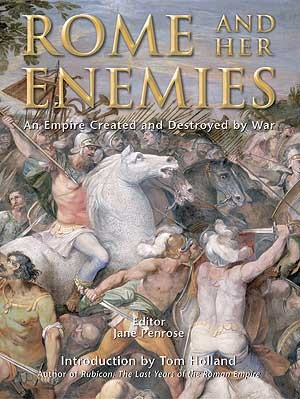 Rome and her Enemies
An Empire Created and Destroyed by War

About this book:
Spanning over a thousand years and an immense geographical area, the Roman Empire was the greatest in world history. At its most powerful, the Empire cast a shadow across the known world, and its legacy continues to influence politics, art and culture around the world today. Rome's power was won on the battlefield, and the greatness of the Empire is reflected in the warlike reputations of the enemies it subdued. Hannibal, the Carthaginians, Mithridates, the Gauls, the Sassanid Persians and the infamous Goths are amongst the forces that battled the might of Rome. Rome and Her Enemies juxtaposes the society and military structure of each of these peoples with those of the contemporary Roman army. Using previously published Osprey material, this book is divided into four chronological sections focusing on major wars and battles, is lavishly illustrated throughout, and colour photographs, artwork and maps support the text to provide a comprehensive introduction to the rise and fall of an empire created and destroyed by war. Introduction by Tom Holland, bestselling author of Persian Fire and Rubicon.