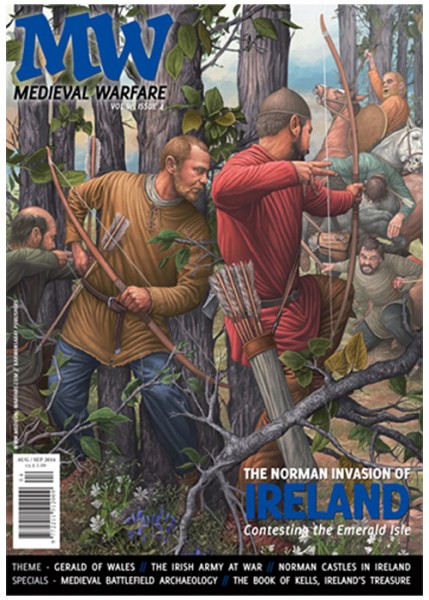 Theme: Katrina Ingram, "An introduction to the theme - The Norman Invasion of Ireland"

In 1166, Dermot Mac Murragh, the defeated King of Leinster, travelled to England to ask King Henry II for assistance, who in turn sent some of his nobles back with Dermot to help him reclaim his land. This plea for help paved the way for Henry's invasion four years later in 1171 and allowed Henry to proclaim himself the overlord of Ireland without having to draw his sword. Yet contrary to popular belief, this was not the first time the Normans had considered an invasion of Ireland.

Theme: Murray Dahm, "Gerald of Wales on the 'conquest' of Ireland"

Gerald of Wales - or Giraldus Cambrensis as he is known in scholarly volumes - wrote two works which have been immensely influential and are of the utmost importance for, not only the Anglo-Norman invasion of Ireland, but for Medieval Irish history in general. These two works, the Topographia Hibernica (Topography of Ireland) and the Expugnatio Hibernica (Conquest of Ireland), are flawed but essential reading and we will see much of them in these pages.

The commonly held view of the Anglo-Normans' Irish opponents is of lightly armed, poorly organized forces incapable of withstanding the charge of knights due to an exclusive reliance on the unconventional tactics of cattle-raids and woodland ambushes. A closer look at both Anglo-Norman and Irish sources, however, presents a different picture, demonstrating a more sophisticated approach to warfare.

Theme: Alistair Black, "A look at ringforts in Ireland"

The ringfort is one of the most numerous archaeological monuments in Ireland, with over 60,000 identified examples across the island. They can be seen across the countryside, often only visible as a faint small circular bank with and external ditch.

Theme: Erich B. Anderson, "The high king fights back - Reclaiming the throne"

For too long High-King Ruaidrí Ua Conchobair failed to properly respond to the threat posed by the Norman troops as they helped Diarmait Mac Murchada reclaim his kingdom. Yet after the sudden death of Leinster's ruler in May 1171, Strongbow and the other foreign soldiers were left in an extremely vulnerable position, for the majority of the Irish chiefs turned against them; even many who were previously loyal to Diarmait.

"His name was greater than his means, his descent greater than his talents, and his rights of inheritance greater than the property in his possession". This description of Richard de Clare, the former Earl of Pembroke, was penned by the Norman-Welsh chronicler Gerald of Wales in his History of the Conquest of Ireland. It captures the essence of de Clare on the eve of his meeting Dermot McMurrough (Diarmait mac Murchada), the deposed king of Leinster. It would prove a fateful encounter for both men, and for Ireland.

In 1169, the first Anglo-Norman detachment landed in Ireland. Success accompanied Norman knights' English descendants, who soon strengthened themselves in eastern Ireland. The Irish held the west and north. Having very few castles at the moment of the invasion, the Irish were unable to hold their lands. The situation greatly resembled the Norman Conquest of England. To fortify their position on the occupied lands, the Anglo-Normans built numerous castles and some cities.

The English invasion of Ireland was, like any other medieval colonial conquest, a brutal affair. Many English (as we should call the Anglo-Normans by this stage) were already acclimatized to the extremes of warfare on the Celtic fringe in Wales and Scotland, but in Ireland they were still capable of being shocked.

Theme: Daniel Mersey, "A picture from the Topographia Hiberniae"

Gerald of Wales' Topography of Ireland was written around 1186 to 1188. It is the most in-depth study we have of Ireland during this period, although later Irish writers disputed the veracity of his work. This is not surprising, given that some of Gerald's assertions in the book's first two parts suggest that Irish cocks crow differently to those elsewhere, that an island exists west of Connacht where corpses do not putrefy, and a story of a wolf talking to a priest.

Special: Peter van Dop, "The added value of battlefield archaeology - One skeleton does not an army make"

Not infrequently, the media picks up on 'archaeological' discoveries pertaining to evidence for medieval battles. However, the reports are often simplified, debatable, or even downright wrong. With just a little bit of historical research, the information can be improved significantly.

In trying to keep with this issue's theme it becomes quickly apparent that films of medieval Irish history are almost nonexistent. When it comes to the Normans on film we seem to be on safer and more copious ground, for there are many Normans on film. All offer insights for medieval warfare and history but, as always, the story is more complex than it, at first, appears.