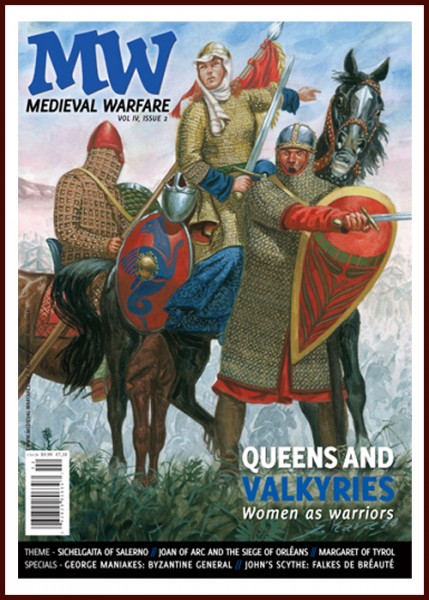 In this modern age of social enlightenment, of gender equality and understanding, there is a dark corner in which sits the great elephant in the room - women in war, or more specifically, women on the front line. It is an emotionally volatile topic that forces any society to question and challenge their perceptions of gender, of women in particular, and of their own foundational beliefs. This debate is not unique to our supposedly gender-liberated society; it is a debate that has raged for centuries. Perhaps the earliest attempt at a balanced debate came in the medieval period. But then, it needed debating, simply because of the number of women who were present in warfare.

The phenomenon of female warriors has been analysed again and again, but each person has his or her own point of view. These views can no doubt be influenced by modern concepts of society, such as feminism. To try to understand what it might mean to be a female warrior in medieval times (as opposed to the modern sense of the term), we could take a look at Viking society.

The scene, as depicted in Anna Komnene's Alexiad, is a stirring one. On 18 October 1081 at Dyrrhachium (Durazzo), Robert Guiscard, Duke of Apulia and Calabria, faced off against a Byzantine army commanded by the Emperor Alexios. With Robert was his wife Sichelgaita.

Theme: Filippo Donvito, 'Queen Tamar of Georgia - the lioness of the Caucasus'.
Illustrated by Maxime Plasse.

Squeezed between the Caucasus mountains, surrounded by fierce tribes of horsemen of the steppes and warlike Muslim emirates, lay the Christian Kingdom of Georgia. By the dawn of the thirteenth century, after ongoing struggles along her faltering borders, this small state had managed to win the respect of her neighbours. Two things they feared most: her formidable cavalry and the indomitable spirit of her warrior queen, Tamar the Great (r. 1184-1213).

Theme: Gareth Williams, 'Joan of Arc and the Siege of Orléans - manipulation and the Maid'.
Illustrated by Milek Jakubiec.

Around 1425, Joan, a fourteen-year-old girl from Domrémy, a commune of Lorraine in France, began hearing voices that demanded the expulsion of invading English forces and the coronation of Charles VII at Rheims. Her obedience to this calling resulted in the proliferation of certain legends extolling her exploits, assigning her a pivotal role in the deliverance of Orléans and France. Although other women claimed divine patronage, why was Joan singled out by the French establishment? Did they discern a personal advantage, manipulating her for political gain? How do the events at Orléans separate the legend fr om reality?

Jeanne d'Arc has become the archetype of the medieval female warrior, but she was by no means the only woman to strap on armour and wield a sword. This is not to say that it was commonplace - fighting women remained the exception rather than the rule, but the exceptions occurred with a much higher frequency than is commonly known. Indeed, on occasion, it was even expected that a woman should wield a sword or exercise command. Such is the case for a number of women involved in the Breton War of Succession, all conveniently named Jeanne, though we will focus on Jeanne de Flandres, also known as the 'Flame of Brittany'.

Only in legend did Margaret, Countess of Tyrol (1318-1369), Duchess of Carinthia and Bavaria, fight in armour, but all the more vividly. Legends have her and her army laying waste to valleys in Carinthia. Clad in armour, her steely embrace crushed men to death in order to drink their blood and bathe in it. In reality, she was the last of the Meinhardiner family, defending her territories as best she could against the turmoil of the times and the aspirations of the three contending families in Central Europe. Locking out her first husband and marrying a new one created quite a stir in Europe.

From the death of Basil II to the accession of Alexios Komnenos, the history of Byzantium seems woefully lacking in military achievement until one considers the "glorious, tempestuous, ill-starred" career of George Maniakes, which proved that Byzantine armies could still win significant victories in an era of military decay - and also that palace politics could undo all those achievements.

Special: Mike Ingram, 'Falkes de Bréauté and the Baron's Wars - King John's scythe'.
Illustrated by David McAllister.
If there was ever an archetypal medieval villain, then it must be Robin Hood's Sheriff of Nottingham. As King John's right-hand man, he was forever scheming, cruel and without mercy as he ravaged the countryside around Nottingham. Whilst the Sheriff is the stuff of legends, the real sheriff of Northamptonshire, Bedfordshire, Buckinghamshire and Cambridgeshire at the beginning of the thirteenth century was far, far worse. Few today will recognize his name, yet he has become part of our daily lives. The Sheriff's name was Falkes de Bréauté.
Weiterführende Links zu "Medieval warfare Vol IV.2 - Queens and Valkyries"
Bewertungen 0
Bewertungen lesen, schreiben und diskutieren mehr
Menü schließen