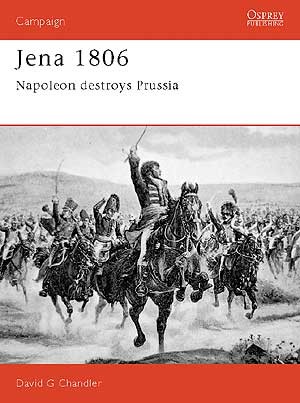 Forewarned of Prussia's intention to declare war on France, Napoleon decided to strike first with a bold advance from Wurzburg into Saxony. On 14 October the double battle was fought: Napoleon with 96,000 men and 120 guns engaged and heavily defeated Prince Hohenlohe and General Ruchel. The decisive engagement was fought further north where Marshal Davout with 27,000 men and 40 guns routed the main Prussian army under Frederick William IV and the Duke of Brunswick. This title examines these two battles, Jena and Auerstadt in detail, showing clearly the swiftness with which Napoleon dealt Prussia's military machine a severe blow.

The Author:
David Chandler was the Head of the Department of War Studies at the Royal Military Academy Sandhurst for 33 years. He was held in immense respect in the field of military history, and held many positions including Honorary President of the British Military History commission, Honorary Founding President of the European Union Re-enactment Societies and Trustee of the Royal Armouries. He was also a Council Member of the Society for Army Historical Research, and a fellow of the Royal Historical Society. Sadly, David passed away in October 2004.