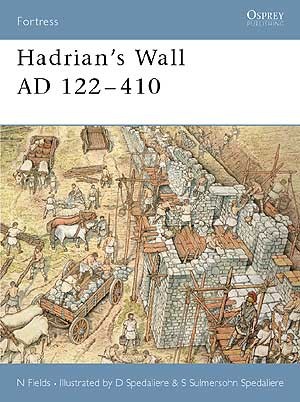 About this book:
Hadrian's Wall is the most important monument built by the Romans in Britain. It is the best known frontier in the entire Roman Empire and stands as a reminder of the past glories of one of the world's greatest civilisations. Its origins lie in a visit by the Emperor Hadrian to Britain in AD 122 when he ordered the wall to be built to mark the northern boundary of his Empire and 'to separate the Romans from the Barbarians'. This title details the design, development and construction of the wall and covers the everyday lives of those who manned it as well as the assaults it withstood.

Dr Nic Fields started his career as a biochemist before joining the Royal Marines. Having left the military, he went back to University and completed a BA and PhD in Ancient History at the University of Newcastle. He was Assistant Director at the British School at Athens, Greece, and then a lecturer in Ancient History at the University of Edinburgh. Nic is now a freelance author and researcher based in south-west France.

Donato Spedaliere was born in 1967 in Lausanne, Switzerland, and moved to Tuscany at the age of 10, where he still lives. Having studied at the Instituto Nazionale di Belle Arti in Florence he served in the Italian Army as a paratrooper. Since 1995 he has worked as a professional illustrator for publishers in Italy and abroad and he is the chief illustrator of Alina Illustrazioni, the company he founded with his wife in 1998.