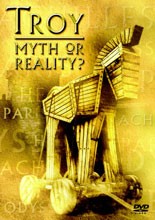 Ten years of fighting and bloodshed...the abduction of Helen of Troy, wife of King Menelaus of Sparta... Hector and Paris, the Trojan warriors, their Greek enemies Achilles and Agamemnon, and the wooden Trojan horse devised by Odysseus which was dragged into Troy allowing the Greek warriors concealed within, to fight their way free and to open the city gates to invaders. This is the story of that ancient city. Referred to in Homer's 'Iliad', it is not beyond the realms of possibility that the legend is based on actual battles fought in the 12th century BC. Where does legend end and truth begin? Is Troy myth, or reality?