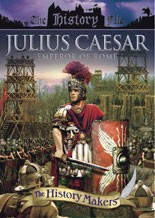 Few men of history have as formidable or as mighty a reputation as Julius Caesar. He is not only one of the central figures of Roman history but a man who shaped the future of the world as we know it today. Rapid promotion from a humble civil servant to military leader put him in command of the powerful Roman Legions who completed the rout of Gaul and Britain. His success established him as great, but also as a bloodthirsty general. His political ambitions also earned him many enemies, especially in Rome, a city that would ultimately prove the location of his demise and assassination. This DVD features extensive expert analysis and comment, as well as exciting dramatic reconstructions and period imagery.