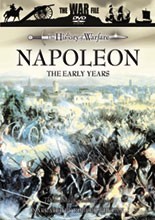 NAPOLEON - THE EARLY YEARS
From his birth in the Corsican capital of Ajaccio in August 1769, Napoleon Bonaparte seems to have been earmarked for greatness. There was little during his early years to suggest as much however, for he came from an ordinary if well-to-do family and had a difficult schooling in France. But joining the military was the making of him and he soon discovered a remarkable gift for impressing influential people. This episode covers the all-important early years of Napoleon's life up to his capture of Toulon in 1793 and the infamous 'whiff of grapeshot', when he fired upon and killed over 200 rebellious French citizens to protect the Government.