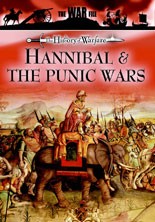 A true giant of military history, Hannibal forged his formidable reputation during the Punic Wars of the second century BC. Famed for his incredible fifteen day journey across the Alps, and for his great victories over the Romans at Trebbia and Cannae, Hannibal remained undefeated in battle until his raw armies were crushed by Scipio at Zama in 203BC, leaving Carthage at the mercy of the hated Romans. This DVD provides an atmospheric depiction of life in those troubled times. Superb reconstructions and re-enactments convey the savagery of battle in the ancient world. Expert comment and analysis and period imagery combine to tell the story of one of military history's greatest generals.