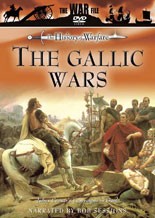 Julius Caesar's Campaigns in Gaul. 'The Gallic Wars' tells the story of the campaigns from 58 BC to 53 BC, in which Julius Caesar and his Roman legions conquered Gaul, and the Celts on the mysterious island of Britain. Caesar's intervention in the brutal Gallic intertribal warfare was originally prompted by genuine concern for Italian security but as the campaign developed, Rome's greatest commander began to hatch plans for full conquest. Remarkably, Julius Caesar's own account of the Gallic wars has survived to this very day. Dramatised versions of these personal memoirs as well as expert views from leading military historians provide a graphic depiction of this chapter in history.