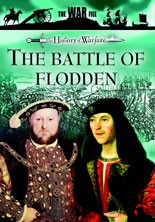 THE BATTLE OF FLODDEN

The September of 1513 saw King James IV invade England with the largest and most confident army Scotland has yet seen. But within a few short days, nearly 10,000 of these proud warriors would be laying dead on Flodden Field. Among the hacked corpses would be the body of King James himself. This is the story of the most catastrophic military defeat in Scotland's history. For a turquoise ring and a foolish promise, James IV had risked, and lost, everything. This DVD includes dramatic and authentic battle re-enactments and the very latest in computer graphics to help tell this chapter in the bloody story of the conflicts between England and Scotland.