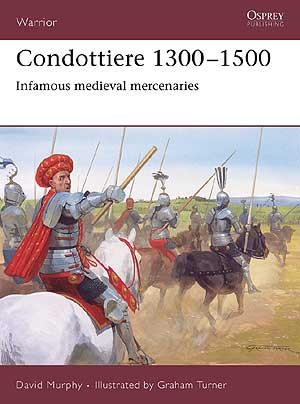 About this book
Originally contracted by wealthy Italian city states to protect their assets during a time of ceaseless warring, many condottieri of the Italian peninsula became famous for their wealth, venality and amorality during the 14th and 15th centuries. Some even came to rule cities themselves. Lavishly illustrated with contemporary depictions and original artwork, this title examines the complex military organization, recruitment, training and weaponry of the Condottieri. With insight into their origins and motivations, the author, Dr David Murphy, brings together the social, political and military history of these powerful and unscrupulous men who managed to influence Italian society and warfare for over two centuries.

The Authors:
Dr David Murphy ws born in Dublin in 1968 and is a graduate of both University College Dublin and Trinity College Dublin. He is a contributor to the Dictionary of Irish Biography, and has published two books and numerous articles. His previous publication for Osprey Publishing was Elite 147 Irish Regiments in the World Wars. He is currently compiling a gazetteer of Irish regiments for the Military Heritage Trust of Ireland.

Graham Turner is a leading historical artist, specialising in the medieval period. He has illustrated numerous titles for Osprey, covering a wide variety of subjects from the dress of the 10th-century armies of the Caliphates, through the action of bloody medieval battles, to the daily life of the British Redcoat of the late 18th century.