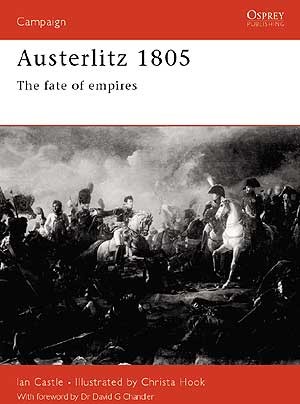 About this book
This all-new volume chronicles the events that climaxed on the field of Austerlitz in one of the most famous battles of history. Not only was it the first campaign Napoleon waged as Emperor of France, but also the first great test for his Grande Armée. The Emperor himself regarded it as his greatest victory and it undoubtedly won him a mastery of Europe that would remain unbroken for almost a decade. Most accounts of the campaign have until now been based almost exclusively on French sources, but following extensive research in the Austrian archives Ian Castle is now able to provide a far more balanced account of Austerlitz.

Ian Castle is a founder member of the Napoleonic Association, and is still very involved in their activities both in Britain and mainland Europe. In addition, he served for many years on the council of the Victorian Military Society and is currently a consultant to the Anglo Zulu War Historical Society, involved in the archaeological project working on the Zulu War battlefields. Ian began writing more than ten years ago and, besides contributing numerous articles to military journals, he has written ten books, five of which are in the Osprey Campaign series.

Christa Hook began her illustrating career in 1986. Her work has featured extensively in the worlds of publishing and television, and she has established herself as one of Osprey's most popular illustrators. Her illustrations combine the historian's attention to detail with the artist's sense of drama and atmosphere, and they are sought after by collectors worldwide. She has had work selected for the Laing Land and Seascape Exhibition 2000 at the Mall, and the Not the Royal Academy Exhibition 2000 at the Llewellyn Alexander Gallery.