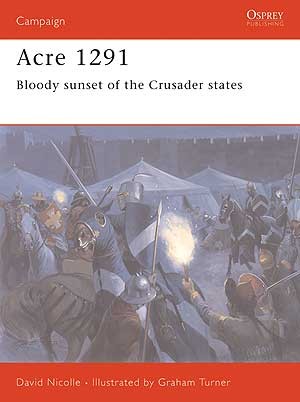 About this book:
In April 1291, a Mamluk army laid siege to Acre, the last great Crusader fortress in the Holy Land. For six weeks, the siege dragged on until the Mamluks took the outer wall, which had been breached in several places. The Military Orders drove back the Mamluks temporarily, but three days later the inner wall was breached. King Henry escaped, but the bulk of the defenders and most of the citizens perished in the fighting or were sold into slavery. The surviving knights fell back to their fortress, resisting for ten days, until the Mamluks broke through. This book depicts the dramatic collapse of this great fortress, whose demise marked the end of the Crusades in the Holy Land.

Graham Turner is a leading historical artist, specialising in the medieval period. He has illustrated numerous titles for Osprey, covering a wide variety of subjects from the dress of the 10th-century armies of the Caliphates, through the action of bloody medieval battles, to the daily life of the British Redcoat of the late 18th century. The son of the illustrator Michael Turner, Graham lives and works in Buckinghamshire, UK.