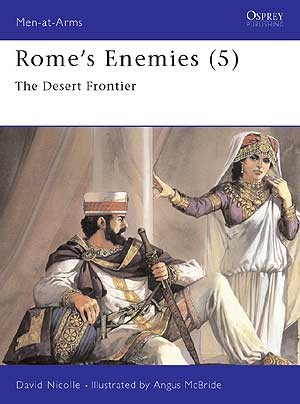 About this book
Rome's desert frontier was one where the Empire faced few dangers, for here relations were generally based on a mutual interest in trade across the frontier. Yet when Rome did clash with desert peoples, particularly those of Syria and Arabia, the mobility, fighting skills and ability to withdraw into an arid wilderness often gave the Arabs, Berbers and Sudanese an extra edge. This fascinating volume by David Nicolle explores the history and armies of Rome's enemies of the desert frontier. The author's fine text is accompanied by a wealth of illustrations and photographs, including eight stunning full page colour plates by Angus McBride.

Born in 1944, David Nicolle worked in the BBC's Arabic service for a number of years before gaining an MA from the School of Oriental and African Studies, London, and a doctorate from Edinburgh University. He has written numerous books and articles on medieval and Islamic warfare, and has been a prolific author of Osprey titles for many years.