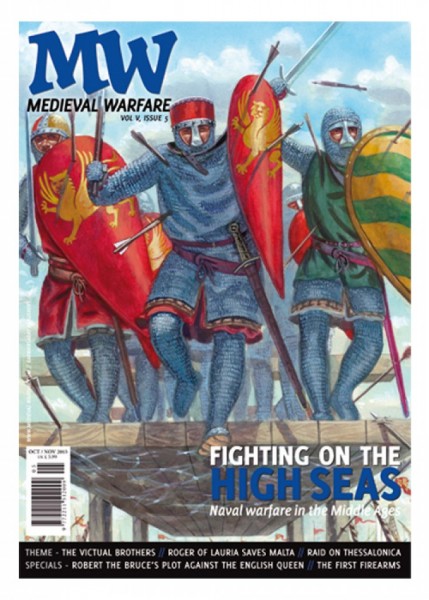 Naval warfare and piracy in the middle ages

Piracy and naval warfare: interrelated categories in medieval maritime conflict. With frequently the same mariners,ships, and objectives at play when it came to both acts of sea robbery and official military operations, the distinctionsbetween these two classifications often prove as shaky as the shifting seas.

In typical imaginings of the Viking Age, the Viking warrior often takes pride of place. With or without horned helmets,the Viking is the archetypal axe-wielding barbarian - slaughtering monks, plundering churches and dragging the innocentto slavery. Horned helmets aside, there is some truth in this stereotype. But of all the iconic images of the Viking age,there is one that looms blackly above every scene of plunder and devastation, and one which played a profound role in thesuccess of the Vikings as warriors and, indeed, of the Viking Age as a whole: the Viking ship.

Theme: Alex Querengasser, "Klaus Störtebeker and the Victual Brotherhood - God's friends and all the world's enemies"

In the late 14th century, longstanding warfare and increased poverty lead to conditions in which piracy flourished in theBaltic. For a few years, the Victual Brothers ruled the high seas and brought trade to a total standstill.They even took on the mighty Hanseatic League. But when the warfare ended, the League was able to strike back.

Theme: Paul Walsh, "Murtaugh 'The great' and Irish naval power - The hand on the rudder"

The extensive use of fleets by Irish kings in the 11th and 12th centuries represents a little known chapter in Medievalnaval warfare. The career of Murtaugh 'the Great' O'Brien (Muirchertach Mór Ua Briain) provides a particularly revealingexample, given his use of warships in three different categories of operations: along rivers, around Ireland's coast,and across the Irish Sea. Naval power was an important tool for rulers such as Murtaugh in the struggle for the kingshipof the whole island and it was specifically through the employment of fleets in the Irish Sea Region that kings such asMurtaugh were elevating to the status of power brokers beyond Ireland's shores.

On 8th July 1283, Admiral Roger of Lauria led the Aragonese fleet to a stunning victory over the Angevin fleet at theBattle of Malta. His success was the result of strong leadership, sound naval tactics and the high morale of his fleet.Malta was the first in a long string of victories he amassed in the War of the Sicilian Vespers: by the end of the 20-yearconflict, Roger had established himself as the greatest naval commander of the High Middle Ages.

The Siege of Paris is one of the most significant battles fought at the time of the Viking invasions. By the end of the9th century, when the city came under attack, the future capital was little more than a fortified settlement built on anisland in the middle of the Seine. Nobody expected it could withstand a year-long siege by a large for ce of Normans.

An iconic characteristic of many medieval vessels that sailed the seas of Northern Europe were the ships' castles.These towering and fortified superstructures provided both a means to both attack and defend against enemy vessels.

Theme: Lucas McMahon, "The Emirate of Crete - Smoke on the water"

In the last two centuries of the first millennium, naval raiding of the Byzantine Empire was at its height.This culminated in the destruction of the Empire's second city, Thessalonica. The root cause of these raids was theloss of Crete and the establishment of a Muslim-ruled state on the island that benefited enormously from pillagingByzantine coastlines.

The Battle: Erich B. Anderson, "The Battle of Myton - To catch a queen"

The spectacular Scottish victory at Bannockburn in 1314 dramatically changed the course of the First War of Independencefrom England. King Robert the Bruce (r. 1306-29) won the throne of Scotland through combat, and his army became ascendantin the region. Over the next several years, Robert fully exploited the fractious state of England by not only reclaimingScottish territory, but also through the launch of several devastating raids throughout the northlands.After the Scots took back Berwick, the last Scottish town controlled by the English in April 1318, Edward eventuallymanaged to rally his forces to put the city under siege the following year. In response, the Scots carried out anextraordinary mission to capture the queen of England; which ultimately resulted in the battle of Myton.

Although firearms are usually associated with modern warfare, they are in fact a thoroughly medieval invention,developed in response to the conditions of the medieval battlefield. However, the usefulness of these early firearmswas severely limited by a number of factors, so that they did not immediately supplant any of the other missile weaponsavailable to the medieval soldier. Any technological revolution represented by these weapons was long in coming.
Weiterführende Links zu "Medieval warfare Vol V.5 - Fighting on the High Seas"
Bewertungen 0
Bewertungen lesen, schreiben und diskutieren mehr
Menü schließen