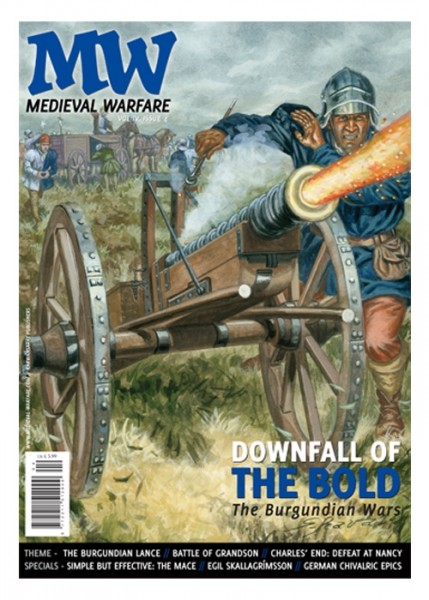 The Burgundian Wars (1474-1477) pitted the two relatively small European powers of the Old Swiss Confederacy and Burgundy against one another. It was a curious war that could and should have been avoided, as it mainly benefited the larger neighbours of France and Austria. The wars could easily have turned into a full-scale European conflict. Instead, the big powers simply sat back and watched the fireworks. Charles the Bold (1433-1477), Duke of Burgundy, never met a fight he did not want to join. Overextended and outfought, his defeats ended the line of Valois dukes of Burgundy.

Although the Swiss never achieved real political unity during the medieval period, by the time of the Burgundian Wars, the loose alliance of small states known as the Swiss Confederation was able to field one of the premier infantry forces in Western Europe. Prior to 1474, the Swiss states had honed their military system and established their ferocious reputation in numerous vicious encounters with their neighbours and each other.

Until the middle of Charles's reign, the Valois dukes of Burgundy, like all the other European monarchs, relied on feudal levies for their military force. However, thanks to the Dukes' organizational efforts, and most importantly due to Charles' reforms, the Burgundian army of the years 1471-1476 was probably the most advanced and powerful force in Europe.

Theme: Gareth Williams, 'Charles the Bold and the Siege of Neuss - Fools rush in'.
Illustrated by Álvaro Calvo Escudero.

In 1474, Charles found himself besieging the imperial city of Neuss. Although advised to raise the siege on a number of occasions, he obstinately persisted in an enterprise that ultimately created serious military and political difficulties for him. In the end, his stubbornness would become yet another step towards his downfall. What happened at Neuss, and how did Charles the Bold's intransigence contribute to a severe reversal of his ambitions?

Duke Charles of Burgundy devoted his rule to the conquest of his neighbours. He had kept the French at bay and had future plans for further territorial expansion in that direction. Under his leadership, the Burgundians became embroiled in Alsace, Savoy, and areas along the Rhine. In 1474, the Old Swiss Confederacy declared war on Burgundy. They would first meet on the battlefield of Grandson.

The Swiss campaign of the Burgundian Wars was a struggle between Charles the Bold and the city of Berne. The latter had not only declared war on the Duke, but also contributed the largest number of troops. Medieval battles often suffer from poor documentation, but the diligent city administration of Berne made sure that the available forces for the Battle of Morat were properly recorded, making it a unique piece of evidence in the medieval era.

After Grandson and Morat, Charles the Bold was desperate for both men and funds. The next blow came in early October 1476, when Duke René II of Lorraine retook his capital city, Nancy. The stakes were high; if Lorraine were to fall completely back to René, Charles' lines of communications between his Burgundian and Flemish possessions would be severed. True to his appellation, Charles the Bold ignored his own weak position and went on the offensive.

The weapon: Gareth Williams, 'Countering the armoured opponent - The mace'.

As the Middle Ages progressed, chainmail, scale and plate armour were all modified to make protecting knights against edged weapons and other projectiles easier. To counter this development, warriors once more turned towards one of the earliest and simplest of weapons: the mace.

Medieval chivalry was a social standard by which many reputations and fortunes were made or lost. Twelfth-century courtly epics, which provide the most original and tedious discourses on chivalry, were important for the creation and dissemination of chivalric codes. Legendary knights, like the lovestruck Tristan and the Arthurian Ywain, pursued challenging quests and provided a set of rules of how to behave in court, towards rulers, knights and ladies of high birth.