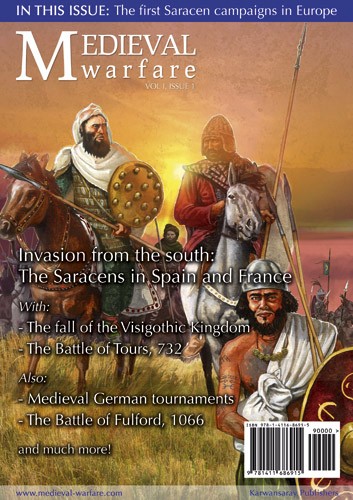 Theme: Invasion from the south: The Saracens in Spain and France.

The Mediterranean underwent some major changes in the 7th century. The Arab invasions broke with the political and social structures in the region inherited from the Ancient Era. They set a new stage and began a new era that would last throughout the coming centuries. The northern shore of the old Mare Nostrum would see the birth of Christian kingdoms and the southern one would house strong Muslim states, defining the course of political, religious and cultural history for many years to come.

The Source: Murray Dahm, 'Arab sources on the conquest of al-Andalus - The other side'.

Histories of the Muslim (or Umayyad) conquest of Spain in the early eighth century have often avoided the use of Arabic sources. These Arabic sources, when addressed at all, have usually been dismissed as useless, and unreliable in comparison to available Latin, Christian material. The Arabic sources themselves are indeed complicated, but this viewpoint has generally been held because of attitudes towards the Islamic period in Spanish history. At best it has been regarded as an unfortunate accident, at worst it has been ignored.

Theme: Alberto Raul, 'The Battle of Guadalete - The Muslim invasion of Spain'.
Illustrated by Christos Giannopoulos

The Muslim invasion of Spain, the Battle of Guadalete and the fall of the Visigothic Kingdom still bring a number of questions to the forefront, which cannot be answered unanimously. Was it an invasion plan or a raid that turned into a successful conquest? Was Roderic a legitimate Gothic king? When was the battle exactly, and where? Did the Visigothic Kingdom fall suddenly or did they adapt to the conquerors pacification policy? So, is there anything we know for sure? As Philippe Wolf says, "where documents miss, hypotheses bloom."

Theme: Kai Grundmann, 'The fracture, downfall, and remnants of the Visigothic Kingdom - Rising from the ashes of defeat'. Illustrated by Darren Tan.

There is a saying among historians: the one fact people know about the Roman Empire is that it fell. The same could be said about the Kingdom of the Visigoths in Spain. Outside of Spain, pupils usually learn of the Gothic downfall and the death of the last King Roderic in 711 as a set-up for the Muslim invasion of France and its defeat in the Battle of Tours and Poitier.

Theme: David Balfour, 'A turning point for Europe and Islam? - The Court of the Martyrs, October 732'.
Illustrated by Jason Askew.

The battle which took place near Moussais-la-Bataille in 732 has been called one of the most decisive in history: a near-apocalyptic struggle in which the Christian forces of the mighty warlord Charles Martel annihilated a fanatical Saracen horde bent on the conquest of all of Europe. Historians have also argued that the battle had a profound impact on the course of European and Islamic history. Despite such assertions, indisputable facts about the battle are meager. Chroniclers have been uncertain even as to what to call it. Western historians have interchangeably identified it as the 'Battle of Tours' or the 'Battle of Poitiers.' Islamic writers refer to it as the 'Court of the Martyrs', a label they have attached to more than one significant Muslim defeat.

At the close of the fifteenth century, the two-handed sword became the weapon of choice for Scottish fighting men, particularly the chiefs and gentlemen of the Highland clans.

Western Europe was experiencing pressure. Throughout the eighth - eleventh centuries, a series of consecutive invasions by Saracens, Vikings, and Magyars necessitated a concerned populace to begin reconsidering and reconstructing their fortifications. Those towns and cities fortunate to have been encircled by sturdy, Roman made stone walls were better able to withstand the successive attacks of the enemy. A flurry of fortifications occurred, from walled towns to castles, including those incorporating a motte and bailey construction. Although it became of paramount importance to protect the population, the construction techniques of these defensive structures varied in a number of ways. Why?

Tournaments in the fifteenth century were formal affairs, where the nobility could show off their prowess (in the use of arms) in front of other nobility, colleagues and ladies of the court. Most tournaments were multiple day events, consisting of two or three days of jousting or tilting, and one day of melee or small mock battles. During the latter fourteenth and early fifteenth centuries, costs for sponsoring a tournament became more difficult, if not impossible, so action was taken by groups of knights and nobility to sponsor and participate in these events.

The Battle: Charles Jones, 'The Battle of Fulford, the 20th of Septeber - The first and forgotten battle of 1066'. Illustrated by Carlos Garcia and Dariusz Bufnal

Following the death of King Edward 'The Confessor', Anglo- Saxon England was facing two invasions in 1066. The dying King Edward had spent his youth as an exile in Normandy, and there is good evidence to believe that he once favoured passing his kingdom to Duke William. However, his attempt to introduce Normans to positions of influence had been firmly rejected by the English Earls who refused to support their king, for example when the Godwinson family returned from exile after they had opposed the Normans. So Duke William had probably been planning an invasion of England for many years. The Norse invasion, however, was not expected.