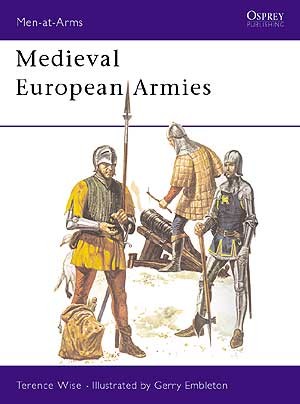 About this book:
Almost continual warfare raged in Europe during the period 1300-1500. These wars were the furnaces in which many of the modern European nations were forged. Parallel with this emergence of the nations came the development of national armies to protect the newly-won borders and independence, yet throughout this period the old feudal method of raising an army persisted. This fascinating study by Terence Wise explores the organisation, weapons and equipment of the armies who fought across medieval Europe, from the Hundred Years War to the fight against the Moors in Spain and the French invasion of Italy.

The Authors:
Terence Wise is one of Osprey's most popular authors. Terence has been a respected historical writer for more than 25 years. With numerous books and articles to his credit, he has contributed more than a dozen titles to the Men-At-Arms series, mainly on medieval subjects including studies of the military orders and the Wars of the Roses.

Gerry Embleton has been a leading illustrator and researcher of historical costume since the 1970s, and has illustrated and written Osprey titles on a wide range of subjects over more than 20 years. He is an internationally respected authority on 15th and 18th century costumes in particular. He lives in Switzerland, where since 1988 he has also become well known for designing and creating life-size historical figures for museums.