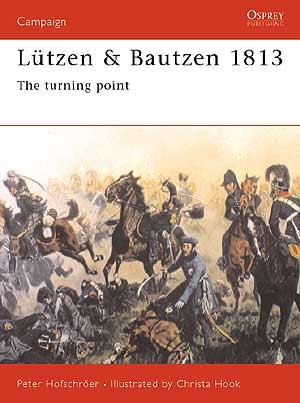 About this book:
Following the disastrous Russian campaign of 1812, Napoleon found himself facing a new coalition of his old enemies. With incredible speed he raised an army of 200,000 men and marched to join the remnants of the old Grande Armee in Germany. However, he no longer faced the brittle enemies of 1805 and 1806 and at Lützen on 2 May the inexperience of his new army began to show. Faulty reconnaissance by raw cavalry allowed Ney's Corps to be surprised by Wittgenstein's Russians. This book describes the last realistic chance Napoleon had to regain his empire by defeating the allies in Germany before Austria stirred and the tide turned even more against him.

The Authors:
Peter Hofschröer is a qualified historian and linguist specialising in the Napoleonic Wars. His two volume work 1815: The Waterloo Campaign received the 1999 Napoleonic Society of America Literary Award. He is a well-known contributor to various academic and hobby magazines, is a fellow of the International Napoleonic Society and has been twice awarded the Bismarck Memorial Medal.

Christa Hook began her illustrating career in 1986. Her work has featured extensively in the worlds of publishing and television, and she has established herself as one of Osprey's most popular illustrators. Her illustrations combine the historian's attention to detail with the artist's sense of drama and atmosphere, and they are sought after by collectors worldwide. She has had work selected for the Laing Land and Seascape Exhibition 2000 at the Mall, and the Not the Royal Academy Exhibition 2000 at the Llewellyn Alexander Gallery.