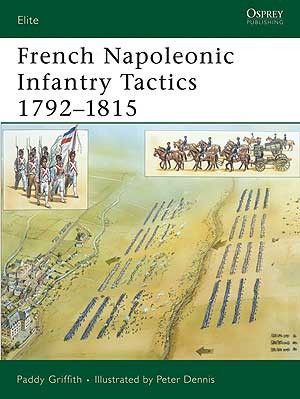 About this book
Bonaparte's Grande Armée, one of the most renowned battle-winning machines in history, evolved from a merging of the professional army of the Ancien Régime and the volunteers and conscripts of the Revolutionary levée en masse - although the contribution of the former is often underestimated. A leading authority on the history of tactics draws here on original drill manuals and later writings to explain how the French infantry of 1792-1815 were organized for fire and movement on the battlefield. Illustrated with clear diagrams and relevant paintings and prints, and specially prepared colour plates, this text brings the tactical aspects of eight battles vividly to life.

Paddy Griffith is a freelance military historian based in Manchester. His groundbreaking books on low-level tactics include Forward Into Battle (1981 and 1990), Battle Tactics of the Civil War (1986) and Battle Tactics of the Western Front (1994). He has also written extensively on wargames, and is currently active in the South Manchester Tactical Society and in the Battlefields Trust.

Peter Dennis was born in 1950. Inspired by contemporary magazines such as Look and Learn he studied illustration at Liverpool Art College. Peter has since contributed to hundreds of books, predominantly on historical subjects. He is a keen wargamer and modelmaker. He is based in Nottinghamshire, UK