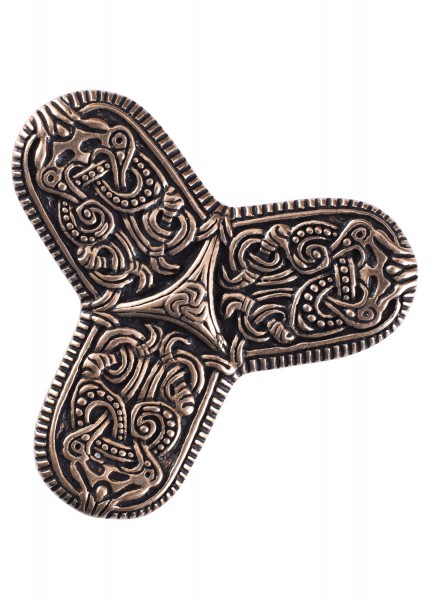 Another beautiful viking brooch in clover shape, which was made as a replica of a vestment clasp found in Tranby/Norway. The original is about 3 cm larger, but the replica does not lose any of its charm. Stylistically this Viking brooch from the 10th century can be classified between the Borre and Jelling styles.

The Jelling style (or Jellinge style)
... one of the six known Norse art styles, prevailed from the beginning of the 10th century up to ca. 975. This particular VikingAge style is characterized by the recurrence of human and animal representations, plant motifs (tendrils and leaves) and geometricfigures. While the preceding Oseberg and Borre styles featured animals of rathersquat, stocky build, the Jellinge animals are depicted with particularly slender, elongated, ribbon-shaped bodies.

The Borre style
... superseded the Oseberg style in the course of the 9th century and prevailed until the middle of the10th century. The early medieval Borre style, also referred to as the gripping-beaststyle, is named after the Norwegian locality of Borre on the Oslo Fjord. This style is characterized by representations ofanimals and knot patterns and was later followed by the Jelling style.