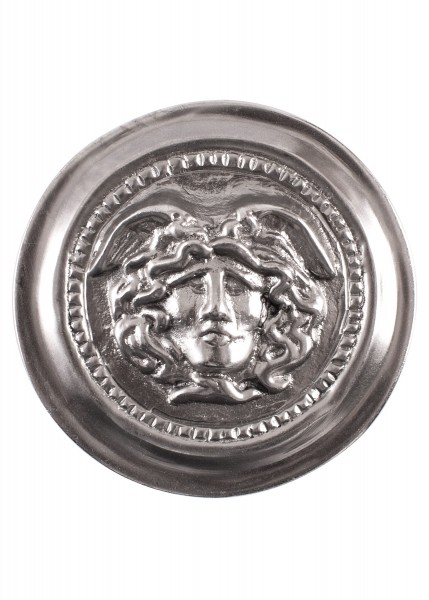 A phalera is the Roman equivalent to a military medal or trophy. In Ancient Rome, these ornate disc-shaped plates, usually made of gold, silver or bronze, were awarded to Roman soldiers who had distinguished themselves in battle. During parades, a highly decorated Roman legionary (called a phaleratus) would exhibit his phalerae on a leather chest harness worn over his armour. Honored veterans who had amassed enough medals for a full harness were highly respected.

This reproduction of a Roman phalera is cast from brass and tin-plated. It bears the effigy of Medusa, also known as Gorgo, one of the three monstrous female Gorgons in Greek mythology.

This brass phalera with Gorgon head is perfectly suited for your own DIY project or as a replacement/spare plate for Roman chest harnesses, for example our product no. 1016676500. Mounting hardware is not included in delivery.

An ideal accessory for Roman re-enactment.

Specs may slightly vary from piece to piece.