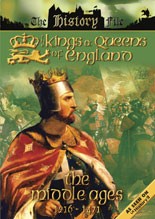 DVD Kings And Queens Of England The Middle Ages

KINGS AND QUEENS OF ENGLAND - THE MIDDLE AGES

We begin the Middle Ages programme with a monarch much ignored by history - King Louis. Short-lived though his reign may be, Louis ruled England in the months between the death of King John and the coronation of Henry III in 1216. The next 183 years were to become known as the Plantagenet period and in addition to Henry III they would be ruled by Edward I, Edward II, Edward III and Richard II. In 1399 Henry IV came to the throne, he was the first of the Lancastrians, the remaining two being Henry V and Henry VI, who between them ruled until 1461. Although historically the Yorkists ruled from 1461 to 1485, Henry VI was temporarily restored to the throne in 1470 only to be deposed again in 1471. See here in great detail how events unfolded during this period of real turmoil; enjoy the atmospheric re-enactments and the expert analysis from Alan Ereira.