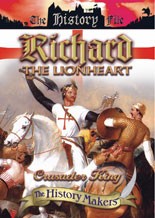 The reign of Richard the Lionheart was one of the most eventful and colourful in England's long history. The third son of Henry II, Richard I devoted his life to defending both his faith and his lands in France - only five months of his ten year rule were spent in England. An outstanding and courageous solider Richard I lead his army on a holy quest, a savage and bloody page in the annals of time known to history as the Crusades. Featuring extensive authentic reconstructions and dramatised 'eye-witness' reports, this is the story of a born solider and a mighty king of England.