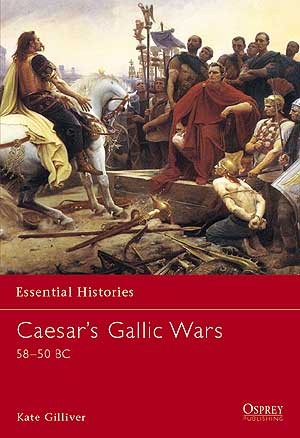 About this book:
Julius Caesar was one of the most ambitious and successful politicians of the late Roman Republic and his short but bloody conquest of the Celtic tribes led to the establishment of the Roman province of Gaul (modern France). Caesar's commentaries on his Gallic Wars provide us with the most detailed surviving eye-witness account of a campaign from antiquity. Kate Gilliver makes use of this account and other surviving evidence to consider the importance of the Gallic Wars in the context of the collapse of the Roman Republic and its slide toward civil war.

Kate Gilliver studied Classics and Classical Archaeology at King's College London and took her PhD in Roman Military Theory at The Institute of Archaeology, University College London. She is lecturer in Ancient History at Cardiff University and is the author of The Roman Art of War (1999). She is currently preparing a book on Roman siege warfare and was the historical ccnsultant for a BBC Timewatch programme on Roman soldiers.

Contents:
# Introduction
# Chronology
# Background to war : Building an empire
# Warring sides: Discipline vs. spectacle
# Outbreak: The migration of the Helvetii
# The fighting: Invasion, siege and conquest
# Portrait of a soldier: Caesar's centurions
# The world around war: The impact of the conflict
# Portrait of a civilian: Roman merchants
# How the war ended: Roman triumphs
# Conclusion and consequences: Pax Romana
# Further reading
# Index