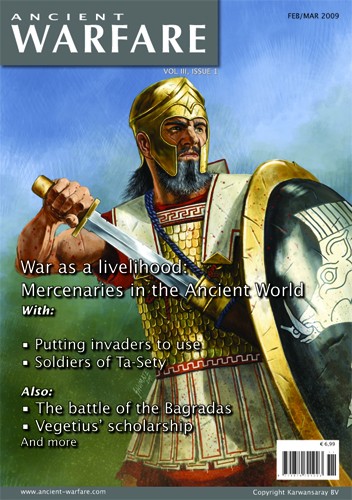 Theme: War as a livelihood - Mercenaries in the Ancient World

The Source: Duncan B. Campbell, 'Theatre of war.'

The endemic warfare of the Hellenistic world brought an increase in the number of soldiers for hire. Their history can be pieced together from the works of Diodorus Siculus and others. But an interesting sidelight is shed by an unexpected source: the comedies of the Athenian playwright Menander.

This beautiful and generally unknown bronze helmet from ancient Heraclea (modern Policoro) at the Gulf of Taranto in southern Italy is a fine example of a Southern-Italian-Chalcidian-style helmet with hinged cheek pieces. It was found in grave #1188 in the eastern necropolis of the ancient city and was part of a warrior's panoply.

The political environment of the fourth century and its corresponding opportunities lead to the regular appearance of the mercenary general in a number of different forms. The true condottiere, a mercenary leader entirely free from state affiliations and following only his own self-interest, had been and would continue to be a relatively rare occurrence in ancient Greece.

Nubia, now classed as the Middle Nile Valley, is situated in the northern area of modern Sudan and the southernmost part of Egypt. It was known as the first nome (district) of Upper Egypt. The name 'Nubia', may have been derived from the Egyptian word, nb, which means gold, the latter being the most valuable commodity of the region. Nubia was also called Ta-Sety, 'land of the bowmen.' It is often referred to as Wawet by the ancient Egyptians and Kush, by archaeologists.Theme: Ruben Post, 'Mercenary archers'.

When one thinks of light troops in Graeco-Roman armies from the Classical period until the rise of Rome, the first image to come to mind is often that of the ubiquitous Cretan archer. Cretans served far and wide and were perhaps the most famous archers of antiquity. In that age of mercenary warfare the Hellenistic period, Cretans are found fighting for almost every military in the Mediterranean, and it is not uncommon to hear of groups of Cretan mercenaries fighting each other in major battles.

The fate of nations is often decided on battlefields and the course of battles may be decided before they are fought by the tactical genius of great generals. History's foremost military commanders led their people to conquest or fought to stave off being conquered. They fought as usurpers or championed freedom and spread ideologies. Rarely in history have leaders altered the course of history solely for that purest of motives: profit. Xanthippus of Sparta was one such man.

Theme: Alberto Perez Rubio, 'Putting the invaders to use'.

The Galatian invasion and the attack on Delphi in 279 BC, part of the great Celtic expansion of the fourth and third centuries BC, shocked the Hellenistic world in a way very similar to how the tumultus gallicus, the fear of a Gallic invasion, haunted the hearts of Romans since the sack of their city in 390 BC. Galatians became the epitome of the barbaroi, a role played two centuries before by the Persians, a threat to the civilized world that only providential men - Hellenistic basileis (kings) of course, as they themselves would quickly proclaim - could deal with.

In the early Imperial era, did the Roman emperors ever employ mercenaries, that is professional warriors from outside the bounds of the empire hired on (relatively) short-term and possibly lucrative contracts, to fulfil specialist functions in which the Roman army was deficient, or to bolster the strength of field armies during particular campaigns or wars?

Vegetius' Epitoma Rei Militaris is the only surviving work from antiquity of a Latin 'science of war' better known as De Re Militari. This genre had a long history stretching back to Cato the elder in the second century BC. Four earlier treatises, none of which survive, were used by Vegetius. Which were these and how did he use them?